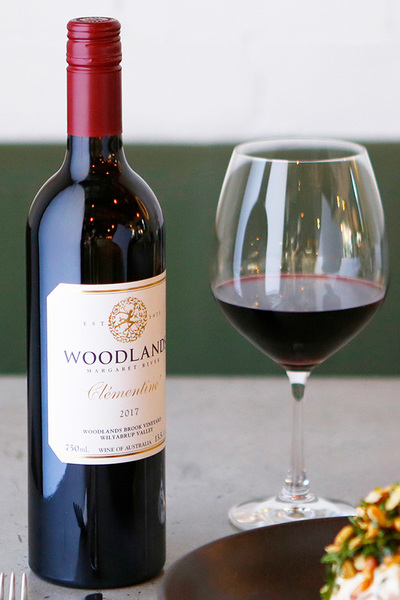 ‘Clémentine’ is our Woodlands Brook Vineyard Cabernet blend. Produced since 2015, the wine takes its name from Andrew and Marie’s daughter; and much like that lovely little girl we love and are getting to know, over time we’re learning more about this site.

The Malbec, Merlot, Cabernet Franc and Petit Verdot were already planted when we purchased the vineyard in 2008. Close planted, spur pruned, and in need of a little TLC, the wines produced initially were tannic. Over the years we have been converting the plots to cane pruning to soften the tannins, and create a more balanced canopy and fruit set. We planted the Cabernet Sauvignon in a gravelly meadow of Woodlands Brook in 2009, and these vines were brought up cane pruned and unirrigated. It took them longer to produce, but the fruit that arrived was fantastic – powerful, dark and perfumed.

So this brings us to 2017, a year that presented some unusual weather patterns throughout the region. Winter was very wet, Spring was bitterly cold, and Summer was mild. La Nina conditions resulting in a longer flowering and growing period across the region, around 2-3 weeks later than normal (this is actually more in line with the historical phenology of the region). We experienced some heavy rains mid-February through to March, delaying the harvest further – our Cabernet Sauvignon was not harvested until the end of April. Given the cooler conditions, we were not expecting to see perhaps the darkest colour we’ve ever seen in our 2017 wines, and incredibly ripe supple tannins – a very pleasant surprise!

This wine was destemmed and sorted by our state-of-the-art gravity fed system. Once harvested and in the winery, the fruit was delivered to the destemmer by a vibrating hopper. Once gently destemmed, the fruit passed through a set of rollers to remove leaves and stalks, then sorted a second time by hand on the sorting table. Following fermentation, the Cabernet Sauvignon portions remained on skins for added complexity and tannin integration. Once fermentation was complete this wine was transferred into French barrels where it remained for 16 months. 35% of the barrels used were new.

The 2017 is a blend of 56% Cabernet Sauvignon, 16% Malbec, 13% Merlot, 9% Petit Verdot and 6% Cabernet Franc. The colour is bright, and remarkably dense and crimson. The nose reveals the classic Wilyabrup Valley combination of violet and brambly red fruits, with a touch of vanillin French oak. The palate follows with a sense of purpose- marching to the beat of red berry and dark berry fruits, with dark cocoa following along in the background. The Finish is polished and sleek, with excellent integration of gravelly tannin and fine acidity.