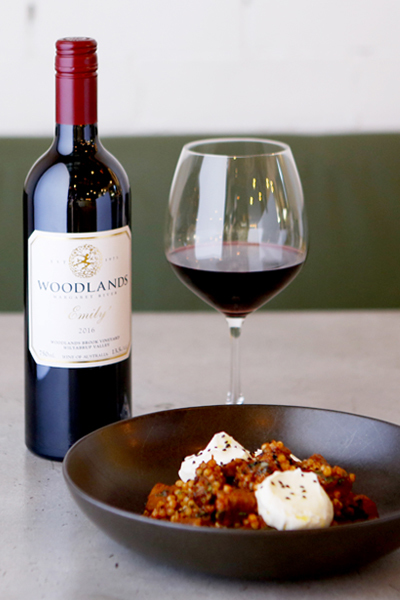 Woodlands has been producing ‘Emily’ since 1989. Woodlands had almost ceased production at the time, and almost all of the Cabernet Sauvignon fruit was sold each year. David Watson and his great friend Peter Anderson discussed what to do with the remaining Cabernet Franc, Malbec, Merlot, and a little Cabernet Sauvignon. The idea came to make a “right bank” Saint-Émilion blend and call it “Emily”.

When the decision was made to purchase the Woodlands Brook Vineyard, we certainly believed its existing plantings to be serendipitous – no Cabernet Sauvignon (yet), but there was Merlot, Cabernet Franc, Malbec and Petit Verdot planted on a gentle north facing slope of sandy loam. So, from 2008 ‘Emily’ became both our expression of the “right bank” blend, and the expression of that site at Woodlands Brook. This wine is made in very limited quantities, with only 300 cases being able to be produced each year.

2017 presented some unusual weather patterns throughout the region. With very wet conditions leading into winter, and Spring being bitterly cold. Our summer was a very mild one this year, with La Nina conditions keeping the temperatures low and avoiding any extremes of heat. This resulted in a longer flowering and growing period across the region, around 2-3 weeks later than normal. This was more in line with the historical phenology of the region. We experienced some heavy rains mid-February through to March; however our non- irrigated vines were able to flourish and with our timely and fastidious vineyard practices, we were able to produce fruit of exceptional quality despite what nature presented us with.

Like all red wines at Woodlands, this wine was destemmed and sorted by our gravity fed system. Once harvested and in the winery, the fruit was delivered to the destemmer by a vibrating hopper, where the stems are removed by a swinging motion. Once destemmed, the fruit passed over a vibrating sorting table. Following fermentation this wine was matured in French oak barrels for 14 months, of which forty percent were new.

The 2017 ‘Emily’ is bold, muscular, but still refined, and certainly up there with the greatest vintages. The wine has a brooding nose of blackcurrant, violet, bay leaf, and toasty French oak. The palate is mouth coating and dense- showing an array of dark fruits and spice. A powerful wine that will certainly repay cellaring.

This wine would definitely reward time in the cellar - best enjoyed from 2027 to 2031.

For food to match- we recommend roast duck, or sticky Chinese pork belly.